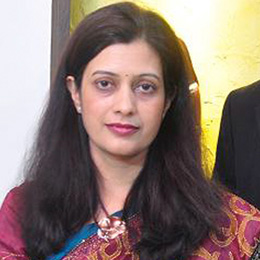 Labour pain is the worst pain that a woman experiences during her lifetime. It is not just pain but a complete physical, mental and emotional assault on her body. According to American Society of anaesthesiology, in the absence of contraindication, maternal request is a sufficient medical indication for pain relief during labour.

History- In 1847, Dr. J.Y. Simpson was the first one to administer ether to a woman during childbirth. Later in 1853, Dr. John Snow gave chloroform to Queen Victoria for the birth of her eighth child, which popularized pain relief in labour.

Ideal Obstetric analgesic should be safe for mother and the baby, easy to administer, should not interfere with the process of labour and should be flexible to changing demands of labour. 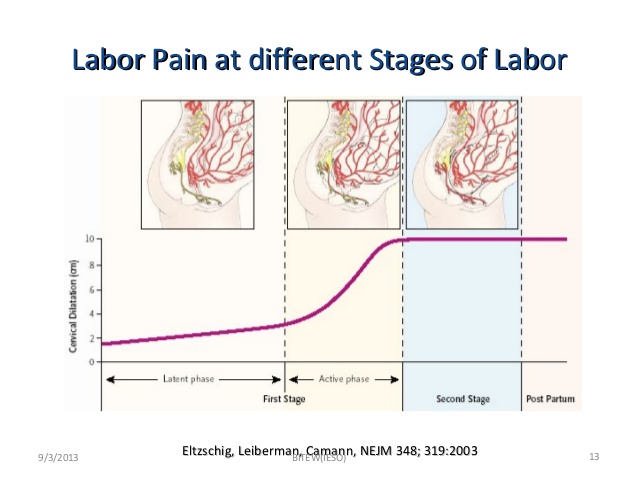 Pain in first stage of labour- arises from uterine contraction and cervical dilatation and is referred to cutaneous branches of T10- L1 dermatomes.

Pain in second stage of labour is caused by distension of perineum by the presenting part, stretch on bladder, urethra, rectum and is referred to lower lumbar and sacral segments. Pain is carried by A delta and C fibres. 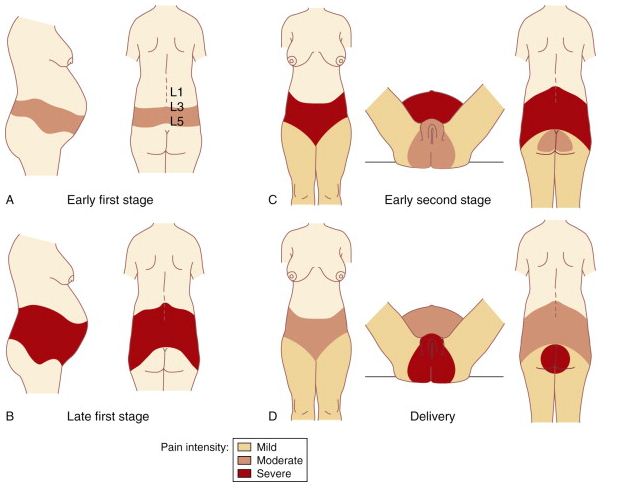 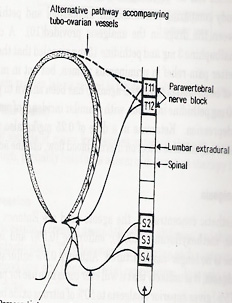 Advantage of labour analgesia– it causes reduction in the release of maternal catecholamines, prevents hyperventilation and hypocarbia and prevents shift of oxyhaemoglobin dissociation curve to left. Thus pain relief during labour has advantages for mother as well as baby.

Various methods have been tried and described.

Prepared Child birth– This method was described by Grantly Dick-Read. It involves educating the mother about anatomy of pelvis and physiology of labour and preparing her for the forthcoming event of labour. 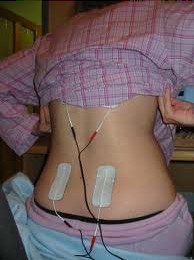 Disadvantages are drowsiness and theoretical risk of renal failure due to fluoride ions. However, in subanesthetic doses, there is no depressant effect on neonate nor increase in blood loss.

Desflurane– Due to its low blood gas coefficient, it allows rapid onset and offset of action. It provides effective analgesia comparable to Nitrous oxide. Patient may have amnesia after its use.

These agents did not gain much popularity because of exposure of health care workers to high concentrations of inhalational agents.

Systemic analgesics- they have a certain advantage of ease of administration. Anesthesia personnel is not required. They are inexpensive and require minimal monitoring. Moreover, rate of complications is very low.

Disadvantage is inadequate pain relief, delayed gastric emptying, nausea, vomiting, respiratory depression. They may cause neurobehavioural changes in the fetus, beat to beat variability may be lost.

Pethidine– it is the most popular drug in Obstetric practice due to its lipophilicity and potent analgesic property. It can be given 25-50 mg IV or 50-100 mg IM. The peak effect occurs within 10 minutes of IV administration and 45 minutes of IM administration. Pethidine causes increase in contractility of body of uterus and reduced contractility of the cervix, thus facilitating cervical dilatation and thereby labour. However respiratory depression in the neonates is seen if delivery takes place within 2-3 hours of administration of the drug.

Fentanyl– It is rapidly acting and has shorter duration of action. It is highly lipid soluble and does not have any active metabolites. It can be given IM 50-100mcg. Analgesia begins in 7-8 minutes, peaks at 30 minutes and lasts for 60 minutes. After IV administration onset of analgesia is within 3-5 minutes and lasts for 30-60 minutes.

Remifentanyl– it can be used as patient controlled IV anesthetic agent PCIVA. Can be given in 0.2-0.5mcg/kg with 2 minute lockout interval and no concurrent infusion. Drowsiness and apnea are the common side effects. Oxygen saturation monitoring should be done diligently and there should be access to Naloxone.

This method has been tried by some clinicians. Antacid prophylaxis is given. Complete preanesthetic evaluation is done. In first stage of labour, bolus dose of Ketamine 10-15mg followed by infusion of 0.5-1mcg/kg/min is given. At the time of crowning, 0.2-0.4mg/Kg can be repeated. Dose should not exceed 100 mg.

Verbal contact with the patient should be maintained. Patient may have restlessness, disorientation, dryness of mouth. Possibility of neonatal depression is there if total dose exceeds 100mg.

It is by far the best technique of providing pain relief during labour without any depressant effect on the neonate and provides satisfactory analgesia to the mother. Moreover, it can provide anesthesia for caesarean section if need arises.

Preanesthetic checkup – A thorough examination should be done prior to initiation of block. The fetal status should be assessed and informed consent should be obtained. Intravenous infusion should be started. All the equipments and drugs for resuscitation should be kept ready. Maternal and fetal monitors should be available.

When should analgesia be initiated?

However, analgesia can be started on demand even at 2-3 cm dilatation. Chestnut et al have found that there is no increased incidence of caesarean section even if epidural analgesia is given earlier. 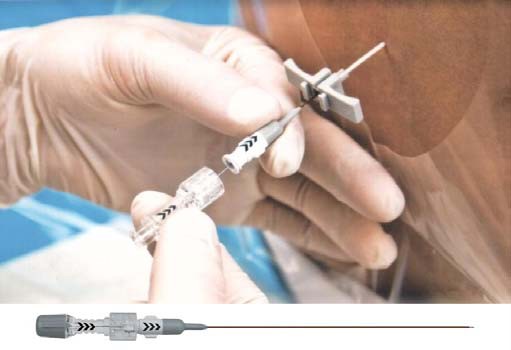 Place epidural catheter in L3-4, L4-5 space, give a test dose of 2ml Xylocaine with adrenaline. Wait to rule out intrathecal injection which will cause dramatic pain relief or intravascular injection causing tachycardia. When epidural placement is confirmed, give a bolus dose.

First dose of Bupivacaine 10-12ml 0.125% with 10 microgram/ml of Fentanyl is given. Ropivacaine 0.125%-0.175% can be given. Advantage of using Ropivacaine over Bupivacaine is less cardiotoxicity, less sensory and motor block.

PCEA- Patient controlled epidural analgesia can be given as background infusion of 4-6ml/hour and on demand bolus of 3-4 ml with lock out interval of 20 minutes.

Blood pressure should be checked every 1-2 minutes for first 10 minutes and every 5-15 minutes during the infusion.

Check level of sensory and motor block during the top ups.

For perineal analgesia 10-20 ml of local anesthetic may be required.

CSE is especially beneficial if request for analgesia is made in later stages of labour when cervical dilatation exceeds 4-5 cm. Advantage is rapid pain relief within 2-3 minutes. Epidural analgesia can be initiated later to provide pain relief throughout labour. Intrathecal Bupivacaine 1-2.5mg with Fentanyl 25 micrograms can be given.

Walking or Ambulatory Analgesia– It is a CSE with low dose intrathecal analgesia with epidural analgesia using low dose opioids and local anesthetics . There is no motor block, no hypotension, better patient satisfaction.

Maintain verbal contact with mother. If she complains of dizziness or light headedness inadvertent intravascular injection should be suspected. Numbness in lower extremities followed by hypotension and difficulty in breathing indicates accidental intrathecal injection.

Assess sensory block after each top up dose. Assess motor block by straight leg raising test against resistance. It must be assessed prior to attempt at ambulating.

Pain assessment– Site and severity of pain before and after every top up must be assessed. During infusions, breakthrough pain must be assessed. Perineal pain in labour is felt in later stages of labour, especially if the epidural catheter is placed in L2-L3 space or above. Sacral spread is encouraged by giving a 25degree head up tilt or addition of Fentanyl to the top-up dose.

Assessment of fetus should be done prior to initiation of epidural analgesia and should be continued throughout labour using electronic fetal monitors applied externally. Fetal heart rate can be assessed internally with fetal scalp electrodes. Normal fetal heart rate varies between 120-160/minute. Early decelerations occur with uterine contractions upto 110 per minute. It occurs in second stage of labour due to vagal stimulation. Late decelerationof 20 seconds or more represents uteroplacental insufficiency. 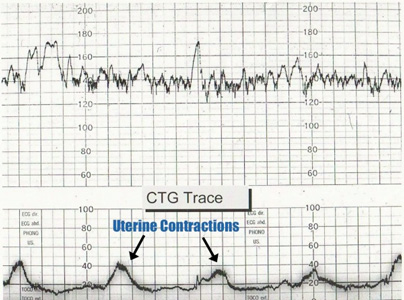