The World Health Organization defines anemia as hemoglobin <13 g/dL in men and <12 g/dL in non-pregnant women. In pregnancy, anaemia is defined as a Hb concentration of 11gm% in first and third trimester and Hb of <10.5 g/dL in second trimester (to adjust for increase in plasma volume).

Anaemia should be viewed as a serious and treatable medical condition, rather than simply an abnormal laboratory value. Depending on procedures and definition of anaemia, upto 75% of patients for elective surgery may be anaemic and upto 90% patients may have anaemia in the postoperative period. The overall prevalence of anaemia in general population increases with age and so many elderly (≥ 65 years) patients presenting for surgery may be anaemic. These patients often present for orthopaedic surgery like fixation of fractures and joint replacement. Orthopaedic procedures are associated with considerable blood loss in the intraoperative period and postoperative periods (in drains).

Three randomized trials in adults and children demonstrated that lower Hb thresholds were well-tolerated in critically ill patients and cardiac surgical patients. The physiological premise that acute hemodilution optimized blood rheology and favoured perfusion led to clinical approaches that further reduced red cell mass in a number of clinical settings. The collective impact of these influences promoted a tolerance for acute and chronic anemia.

But a number of clinical studies have shown that anaemia is associated with morbidity and mortality in the perioperative period. Anemia is a potent multiplier of morbidity and mortality risk, including in the perioperative setting. In a retrospective study of 1958 Jehovah’s Witness patients undergoing non-cardiac surgery, a preoperative Hb concentration of ≤10 g dl was associated with a significant increase in perioperative mortality. This increase was significantly more pronounced in patients with cardiovascular disease (CVD) than in patients without known CVD. A decrease in Hb of ≤2 g/ dl in the absence of CVD was not associated with an increased risk of postoperative death. The risk of death was highest in patients with CVD along with a ≥4 g/ dl or greater decline in Hb. In a subsequent analysis, for all patients, postoperative Hb levels ≥7 g/ dl were associated with some morbidity but no mortality; but for every 1 g /dl decrement below 7 g dl21, mortality risk increased by a factor of 1.5. 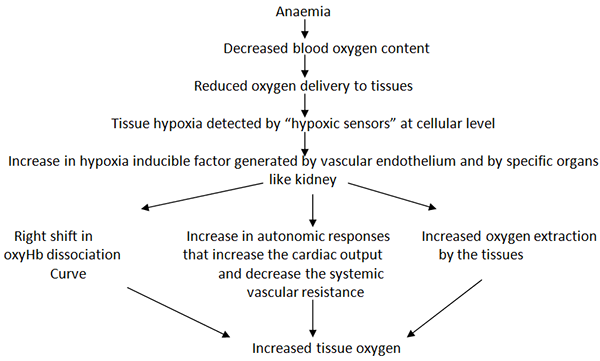 Any factor that interferes with these mechanisms in general and specifically with the increase in cardiac output (β blockade) or local organ specific vasodilatation may disrupt tissue oxygen delivery during acute anaemia (normovolaemic). Although myocardial oxygen consumption increases due to increased heart rate and contractility, an overall reduction in metabolic requirements in other tissues helps to balance oxygen demand and supply. Hence if this situation changes due to any cause like fever, thyrotoxicosis etc., anaemia will cause tissue hypoxia at Hb levels which otherwise would have been tolerated by the patient. Oxygen extraction is an important determinant of adequacy of tissue oxygenation. Normal mixed venous partial pressure of oxygen (PvO2) is 35-45 mm Hg and SvO2 is 72-75%. In chronic anaemia, cardiac output increase maintains a constant arterial to venous oxygen difference and the oxygen extraction ratio is normal (25%). But when there is an acute rise in oxygen demand, the oxygen extraction increases and SvO2 falls along with further possible increase in cardiac output. Acute cardiac failure may result due to excessive strain on the myocardium.

The key consequence of acute anaemia is reduced blood oxygen content leading to reduced oxygen delivery to the tissues and hence tissue hypoxia. The exact mechanisms of organ dysfunction and mortality have not been clearly defined. However, experimental studies have demonstrated that acute anaemia can result in reduction in tissue partial pressure of oxygen which supports the hypothesis that tissue hypoxia could be a significant mechanism of anaemia-induced organ injury and mortality. During anaemia, brain and heart (organs critically important for survival) receive preferential oxygen delivery and hence brain oxygen delivery can be maintained at low levels of Hb (approx 3.5 to 4 gm/dL) while kidney, liver and lungs suffer hypoxia at higher Hb levels ( 6 to 7 gm/dL).

Hb thresholds for individual patients for organ injury and mortality are not known. Some tolerate Hb levels near 7 gm/dL but it is also seen that mortality and neurological injury is increased following cardiopulmonary bypass at this Hb. Optimal Hb may be approx 10 gm/dL for patients suffering from neurotrauma or acute coronary syndrome.

In surgical patients with low admission and discharge Hb levels, the clinical evidence of impaired oxygen delivery  can be seen as –

In addition there could be risk of therapies that impair cardiovascular responses to anaemia, particularly acute β blockade. The POISE (PeriOperative ISchaemia Evaluation) trial emphasized the paradoxical potential for cerebral injury despite myocardial protection in acutely β-blocked (Metoprolol 200 mg given 2 hours before surgery) patients undergoing non-cardiac surgery. The risk of stroke was increased by about 2-fold in β-blocked patients who experienced intraoperative bleeding. A subsequent retrospective analysis also demonstrated a paradoxical increase in acute cardiac events in β-blocked patients who experienced fall in Hb levels. Another study identified an increase in preoperative MI in β-blocked who experienced blood loss and Hb levels < 10 gm/dL. Thus treatment with β-blockers may accentuate the risk of organ ischaemia (brain, heart) in the setting of acute blood loss. The mechanism involved may be global impairment of cardiac output response (β1-blockade) and impaired microvascular dilatation (β2-blockade).

Postoperatively, anaemia resembles anaemia of chronic disease and is probably related to the effects of inflammatory mediators released during and after surgery on the production and survival of RBCs. Proinflammatory cytokines, such as tumour necrosis factor released during
surgery and trauma invoke a response characterized by decreased iron uptake from the gastrointestinal tract and iron sequestration in macrophages, along with a diminished erythroid response to erythropoietin and decreased erythropoietin production.

Other  causes of postoperative anaemia include pre-existing preoperative anaemia and traumatic and surgical blood loss. Also, there is an element of haemodilution occurring as a result of fluid replacement before, during, and after surgery. Normovolaemic haemodilution is well tolerated due to compensatory mechanisms that maintain an adequate myocardial and peripheral tissue oxygenation. On the other hand, hypovolaemic anaemia must be avoided, as the cardiovascular compensatory mechanisms required to maintain oxygen transport in the setting of anaemia are severely compromised.

Risks associated with allogenic transfusion are –

An interesting factor in the relation between transfusion and outcomes is the shelf life of the blood being transfused. Currently storage of blood for a maximum of 42 days is allowed, but a recent study of patients who received red blood cell transfusions during cardiac surgery found that those who received “older blood” (stored for > 14 days) had significantly higher rates of sepsis, prolonged intubation, renal failure, in-hospital mortality, and 1-year mortality compared with those who received “newer blood” (stored for ≤ 14 days).

These different outcomes are attributed to the so-called storage defect: as blood gets older, it loses components such as 2,3-DPG and adenosine disphosphate, its red cells lose deformability, and it undergoes buildup of cytokines and free hemoglobin.

Considering the risks of both anaemia and allogenic blood transfusion, diagnosis and treatment of acute or chronic anaemia prior to elective surgery may reduce morbidity and mortality associated with both.

A multidisciplinary panel of physicians was convened by the Network for Advancement of Transfusion Alternatives (NATA) with the aim of developing practice guidelines for the detection, evaluation, and management of preoperative anaemia in elective orthopaedic surgery. NATA algorithm on approach to the diagnosis and treatment of anaemic patients is given below. Recommendations of NATA are as follows – 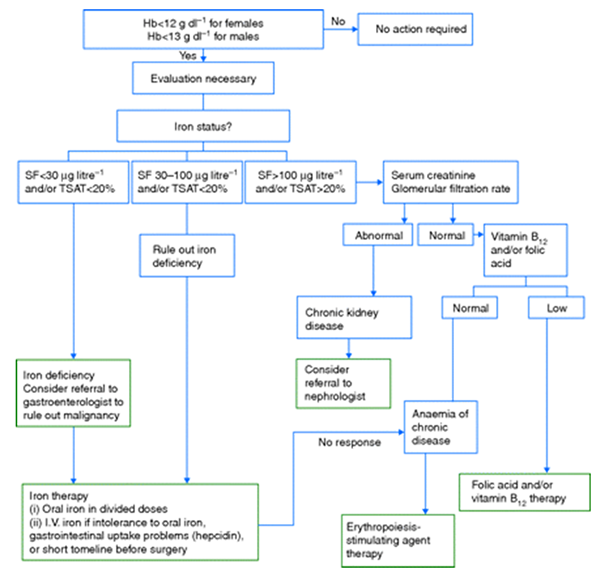 NATA also advises that the diagnosis of an unexpected anaemia in patients undergoing elective surgery in which a significant amount of blood loss is expected should be considered as an indication for rescheduling the surgery until evaluation is complete.

In anaemic patients who have to be taken up for surgery, the choice of the actual anaesthetic technique employed will depend on the severity and type of anaemia, extent of physiological compensation, concomitant medical conditions, type of surgical procedure to be done and the anticipated blood loss. The main anaesthetic considerations in chronic anaemia are to minimize factors interfering with oxygen delivery and prevent any increase in oxygen consumption.

The principles to be adhered to while giving anaesthesia, whether GA or Regional Anaesthesia can be listed as follows –

Patient Blood Management (PBM) employs a patient-specific peri-operative multi-disciplinary, multimodal team approach to optimize, conserve and manage patients’ own blood. PBM aims to identify patients at risk of anaemia and provide a managed plan aimed at reducing or even eliminating the need for allogeneic transfusion with an acceptable risk of anaemia and, as a consequence, at improving postoperative outcome. Evaluating the peri-operative period of elective surgical interventions, 98% of all cases of red blood cell transfusions can be predicted if 3 parameters are analysed. These parameters are the pre-operative haemoglobin, blood loss and individual transfusion trigger. Therefore, PBM is fundamentally based on 3 pillars: 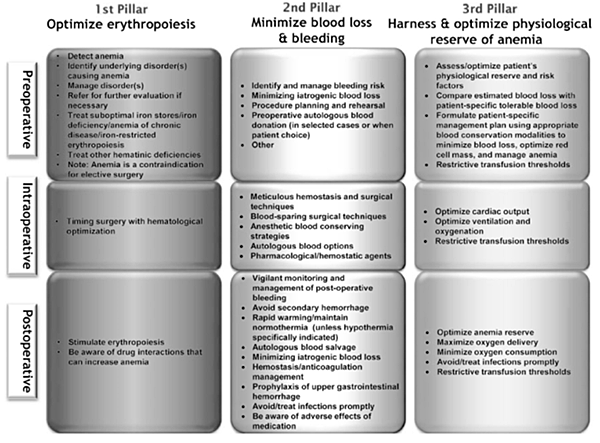 Patient blood management has recently been recognized by the World Health Organization (World Health AllianceResolution A63.R12) as a means to “promote the availability of transfusion alternatives