The role of anaesthesiologist is to maintain physiologic homeostasis during the perioperative period, during which anaesthesia and surgery create an abnormal physiologic state and hence the need to monitor body temperature along with other vital signs and efforts should be made to maintain normothermia.

The anterior hypothalamus is the centre of thermoregulatory control2. The relative contribution of thermal information to the central the thermoregulatory system is 80% from the core and deep body tissue and 20% from skin surface3. This information is compared in hypothalamus to an internal set point temperature which is analogous to the setting on a thermostat. When body temperature is above or below this set point, the first response is behavioural that involves changing the ambient temperature or altering ones clothing. When behavioural thermoregulation is inadequate and temperature exceeds the setpoint, vasodilation and sweating triggers the heat release and when the temperature is below the set point, vasoconstriction is triggered to conserve heat and shivering to produce heat.

The efferent thermoregulatory responses comprise of threshold, gain and maximum intensity4. These are important concepts because they are used to quantitatively assess the degree of thermoregulatory impairment with various anaesthetics as well as the differences in thermoregulation between various individuals. 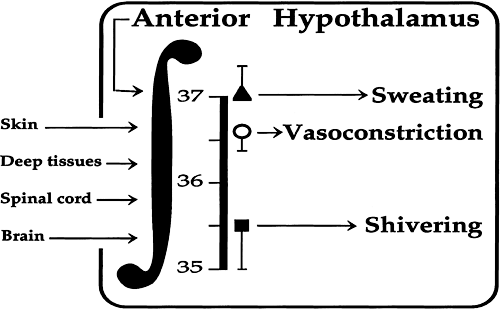 The interthreshold range is a range of temperatures that do not trigger a response. This range (between sweating and vasoconstriction) is normally only a few tenths of a degree centrigrade (0.2°C)7, which is expanded approximately ten folds by anaesthesia. This effect of anaesthesia renders patients poikilothermic 1,4 and body temperature drifts towards environmental temperatures. 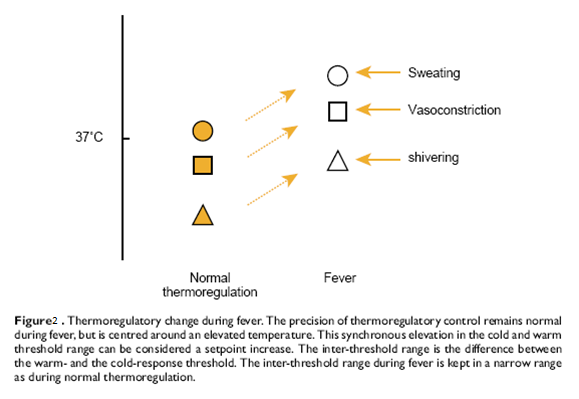 Passive hyperthermia is also an increase in body temperature in which the thermoregulatory set point is normal. Here the heat production by the body exceeds the heat loss.

During general anaesthesia, most patients become hypothermic. However, hyperthermia occurs at relatively higher incidence during anaesthesia in paediatric patients, in patients with brain stroke or injury or acute peritonitis or in otolargyngeal surgeries.
Differentiation between passive hyperthermia and fever under general anaesthesia is difficult, however with fever patient will have vasoconstriction and shivering at emergence.

Fever is considered as a protective response to infection8. The host survival rate, as observed in few studies8 has improved with increases in body temperature and the use of antipyretics significantly decreased the host survival rate. Although fever may be beneficial for infected patients, the associated symptoms, such as increasing cardiac output, oxygen consumption, and energy consumption, are sometimes harmful. In such cases, antipyretic use needs to be considered.

Fever is mediated by immune, endocrine and neuronal systems8. Fever is induced by endogenous pyrogens and probably by vagal signals.
During the perioperative period, external factors such as anaesthesia, sedatives, surgical procedures and perioperative examinations modulate fever.

Volatile anaesthetics, propofol, opioids and sedatives all slightly increase the sweating threshold while markedly decreasing the vasoconstriction and shivering thresholds8. As a result, the sweating-to-vasoconstriction inter-threshold range, which is usually only a few tenths of a degree centigrade (°C), increases to a 2–4°C range, depending on the drug and dose8.

Re-distribution is a major cause of core hypothermia during epidural and spinal analgesia, contributes to 89% initially8. Core temperature decreases 0.8 – 0.3°C in the first hour of epidural or spinal anaesthesia which is half compared to general anaesthesia. Peripheral nerve block is a more important cause of hypothermia. Shivering and vasoconstriction occur after sufficient core hypothermia but only in the unblocked areas which is insufficient to prevent further hypothermia. Thus nueroaxial blockade will also attenuate fever.

Several studies demonstrate that average temperature is higher in patients given epidural analgesia for labour or post-operative pain treatment8.

However, in postoperative period these patients have normal metabolic rates and ICU environment is not warm enough to induce passive hyperthermia. Inflammatory cytokines are increased during the post-operative period which may attribute towards fever with epidural analgesia8.

It is common and may be a normal inflammatory response induced by surgical stress, and not always infection. Many drugs used in post operative period like opioid, sedatives and NSAIDs may modulate postoperative fever. Fever is considered the earliest and most easily detected sign of infection in surgical patient and hence core body te `peratures should be measured in early postoperative period.

Fever workups should be done only in high risk patients as it is not cost effective and fever in postoperative period is mostly due to surgical stress. Plasma IL6 concentration are found to be a good predictor for infection8.

Fever should be treated with antipyretics in patients with cardiopulmonary dysfunction, acute brain stroke or injury, or in whom temperature exceeds 40°C. Active cooling is effective for sedated and paralysed patients but not in awake patients as it provokes thermal discomfort.

This Neuromuscular disorder occurs after exposure to triggering agents like inhalational agents and succinylcholine. Incidence is 1:12000 to 1:40000. It is inherited by autosomal dominant pattern with mixed penetrance. Multiple mutations for the ryanodyne receptor of the sarcoplasmic reticulum are causative. Triggering agents cause an imbalance between release and reuptake of calcium from sites of sarcoplasmic reticulum. The resulting increase in intracellular calcium favours contraction and limits relaxation.

Confirmation of MH requires detection of myoglobin in urine. Skeletal muscle biopsy is the gold standard of MH diagnosis. Thyroid strom, pheochromocytoma and neurolept malignant syndrome needs to be ruled out.